Kemdrum Yoga – Is it myth or real

There is lot of misunderstanding whether Kemdrum is Yoga or Dosha. Should it be considered benefic or malefic? Careful analyses have been made in this article which will make clear all the aspects of Kemdrum. If a native has this yoga in the chart, he should not be afraid without knowing the facts about this Yoga in the chart. Astrologers sometimes exaggerate its effects. But everyone, who has interest in Astrology, should know the facts and truth. So let us know what Kemdraum Yoga is and how it is formed in the chart.

For example, if Moon is placed in Aries Sign and the Signs on either side of Aries i.e. Taurus Sign and Pisces Sign will be the second and twelfth house from Moon. If there is no planet in these two houses except Rahu, Ketu and Sun, this Yoga will be formed.

A lot has been said about this Yoga. This is considered an inauspicious yoga. This is a general belief that person who has this Yoga is in his horoscope is considered unlucky and he suffers from financial problems, lack of stability in life and relations, no support from others and overall failure and disappointments in life – a totally troubled life.  But this is not true in all the cases as in most of the cases; this dosha is nullified or cancelled due to other planetary position in the chart. In such case, its effects are total removed or reduced substantially.

Decision making ability is governed by Moon. Moon also represents our emotions and also denotes the way in which a person thinks. One important trait has been noticed in the nature of a person who is said to be suffering from this Yoga; he likes to live alone. He likes the loneliness in life. He enjoys it. This loneliness is a source of realization for him. Instead of wandering in the society of unwanted friends, he may like to stay alone and enjoys the life in his own way.

This tendency explores his vision and inspires him to live more near to the nature or the natural environment. In such cases, how Kemdrum can be considered bad or malefic? His circumstances may force him to think about improvement in his personality. He will look for the opportunities which provide him innovative and original ideas to make his life more positive and meaningful. This does not mean that such person will not have social life or will not enjoy his friend circle. But in spite of friend or social circle, he may feel more peace of mind when he is alone.

Such person is blessed to discover innovative ideas. He has capacity to find out the new solutions even in difficult situations. What so ever be his profession, he will always think of improving the atmosphere by inventing new ideas. He wishes to be recognized by virtue of his hard struggle in life.

There is another confusion regarding this Yoga that person suffering from such yoga will not get financial stability, he may not be able to earn enough to meet his requirements or he will always face lack of financial resources. But in reality, the truth is contrary to this fact. So many persons suffering from this Dosha are well settled and are in the list of the richest persons of world. Everyone knows about IT Icon Bill Gates. There are so many other examples. They have achieved the heights of their career due to their own efforts and innovative ideas. Michael Jackson is another example. As such the effect of this dosh appears to be only a myth.

But wait! All the persons who got prosperity and success in life even after presence of this Yoga in the chart are only due to cancellation of this Yoga.

In the following circumstances, Kemdrum Dosha should be considered as cancelled. In such cases, native generally does not suffer from ill effects of Kemdrum Dosha.

-When such Moon has the aspect of powerful and strong Jupiter;

-When planets other than Rahu, Ketu and Sun are placed in Kendra (1st, 4th, 7th and 10th house) from Moon and

– When planets other than Rahu, Ketu and Sun are placed in Kendra (1st, 4th, 7th and 10th house) from Ascendant or Lagna. 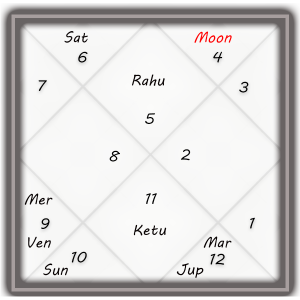 To understand Kemdrum Dosha in proper way, we should have a look at the this birth chart with Leo as the Ascendant:

Moon is placed in twelfth house. Rahu is placed in First house and there is no planet in eleventh house too. As such first condition is fulfilled and Kemdrum Dosha is formed as there is not planet on either side of Moon except Rahu, Ketu and Sun.

Here Moon is getting no aspect from any benefic planet. Kendra houses (1st, 4th, 7th and 10th) from Moon do not have any planet except Sun.

Similarly from Ascendant (Lagna) also there is no planet in the Kendra houses (1st, 4th, 7th and 10th). This is the chart which indicates complete Kemdrum Dosha. This person earned a lot in his life and in spite of sound financial position he lost all his savings in gambling. He suffered a lot in his old days and even his wife left him.

Some precautionary measures should be taken by the native who suffers from this dosha. He should always try to be independent. He should not be dependent on others including the close relatives. Alone and weak moon tries to find out some support and if this becomes the tendency, the person will never be self sufficient and will not make efforts to be self dependent. This will again weaken the Moon. Whatsoever be the circumstances, the person should avoid taking support from others. More the native is independent, stronger the Moon will be. He should and he has the capability to struggle hard to be self dependent.  There are so many personalities, bureaucrats, politicians and administrators who have Kemdrum Yoga and they excelled in their respective fields because they struggled hard and found their own way to achieve their goals.

In the chart of Bill Gates this Dosha is clearly indicated. But the same stands cancelled with the presence of Mars and Mercury placed seventh from Moon.

In the chart of Michel Jackson, this dosha get nullified with the aspect on benefic planets on Moon. Business icon Birla also had this Dosha but cancelled.

This is also a fact that if a person has this dosha in his chart and the same is not nullified, he will lead a troubled life. This is a serious dosha if not nullified. He will earn a lot and will get heights in his life but at the same time will lose everything in the last. He will feel neglected without any support from any quarter.

This has also been observed that even if cancelled, this dosha will have some negative impact on any of the aspects of life of an individual.  Remedies can also help a lot if properly performed after consulting some astrologer.

About the Author of this Article

Dev Kaushik is an expert in Vedic Astrology with over 30 Years experience in Relationship problems, Kundali Matching, Career, Business, and other problems in life. His prediction comprises of deep observation of houses, nature of planets, their position and strength in a horoscope. Remedies suggested by him are traditional and time tested comprising of mantra therapy, charity, pujas, offering prayers, gem and rudraksha therapy.